French farmers find good reason to go Down Under

French farmers find good reason to go Down Under

Developing an ongoing French connection with Australian oyster farmers would be a great benefit to the industry in both regions, according to a group of French farmers who visited South Australia and Tasmania with the help of SEAPA Australia.

The delegation from Oleron, on the West Coast of France were so impressed with their whirlwind 8-day visit to oyster farms, hatcheries and the GARON Plastics factory that they believe a reciprocal arrangement would be great.

Tour organsier Cynthia Carpentier, an aquaculture engineer for CAPENA, said it would be interesting to maintain regular visits, to learn from each other on various aspects of the oyster farming.

“We now want to keep the dynamic and hope the Australians will come across to Charente-Maritime next year,” said Carpentier. 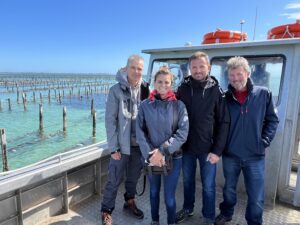 Pristine Oysters company owner Brendan Guidera, with the French oysters farmers Cynthia Carpentier, Olivier Videau and Nicolas Mureau, on his lease and inspecting his stock in our baskets. 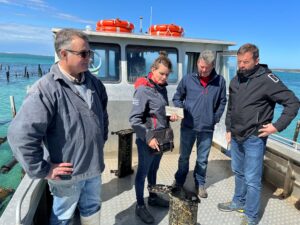 The trio met with Tasmania Oyster Company executive general manager Josh Poke and Camerons Oysters officials for visits to the TOC hatchery and Cameron’s oyster leases.  Then they returned to Adelaide to visit GARON Plastics to inspect how SEAPA’s oyster farming equipment is manufactured.

The visiting farmers next stop was Coffin Bay for a guided tour of the Pristine Oysters’ facility and a tour of Pristine’s oyster lease with owner Brendan Guidera. 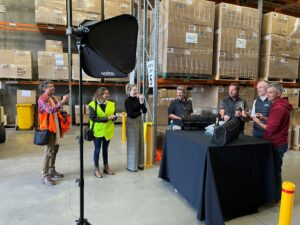 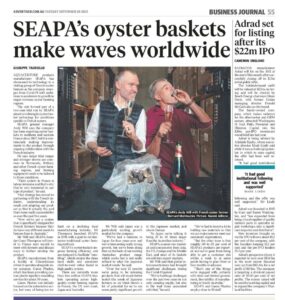 “The exchange was great, we learned a lot with each visit, it will help give us a better understanding of the Australian basket system to apply the best way in Charente-Maritime,” said Carpenter. “The Australian farmers warmly welcomed us, it was great.”

“We discovered another approach of the oyster farming _ the work rate, the workforce, the products,” Olivier said. “I think that perhaps the Australian farming system isn’t as transposable as in France, the environmental conditions are not the same.

“We have the big tide and a lot of fouling that the Australians haven’t.”

“The visits and exchanges with the farmers were the most beneficial.” 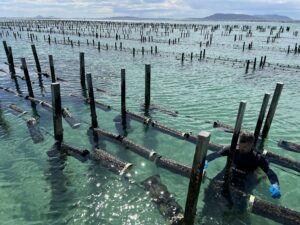 After experiencing the visit to the farms, hatcheries and manufacturer, Nicolas said he noticed a strong collaboration between everybody working in the industry.

“Just like what SEAPA is doing, working closely with the Australian oyster farmer, to enhance the basket. In France we don’t have this link between hatcheries, farmers, and manufacturers.” he said.

“We could see the density used and get advice on that from the farmers who have used them for several years,” she said.  “Going to the hatcheries were also beneficial because it’s complicated to visit the French hatchery.”

All three farmers agreed the farming techniques used for the basket are the same in France, but the Australian farmers put much less oysters per basket.

They said after seeing the number oysters in the baskets in Australia, they now want to test reducing the density and see what happens.

Another big difference the French farmers noticed is Australian farmers manipulate the oysters more by sorting the oyster with the machine on land and splitting the amount in the basket.

The farmer’s visit organised through CAPENA aquaculture by Carpentier, its innovation officer, said the environmental condition was the main difference which had an impact on the farming techniques.

“The tide, the fouling and the sheltered sites help Australian farmers manage their work,” she said. “They are not as dependent on the tide time as in France.”

Another area of the visit they all agreed on was the quality of the oysters.

Cynthia said she found the oyster incredibly good, and the shape very round was completely different from the French oysters.

The three farmers said: “The Australian oysters are beautiful with a great shell and a good meat. The round shape is good too.” 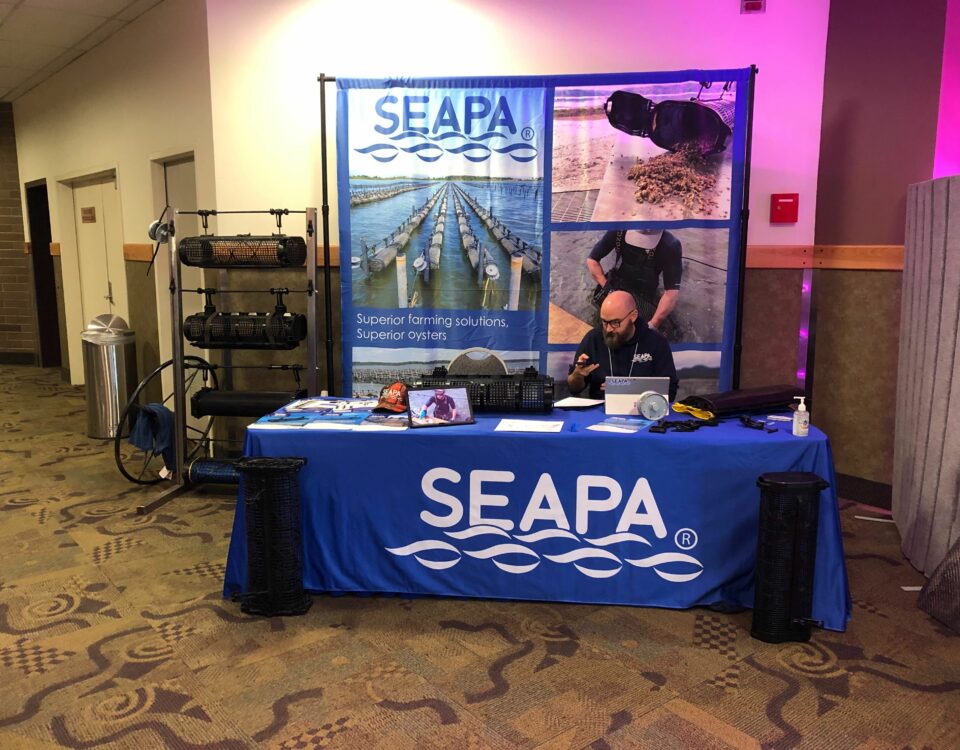 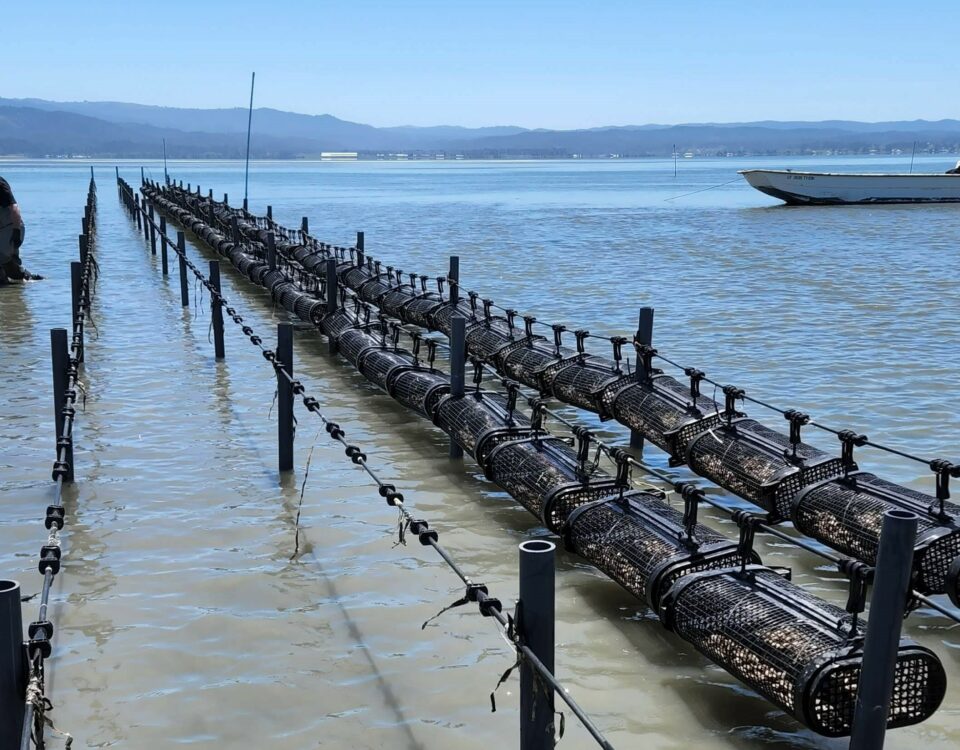 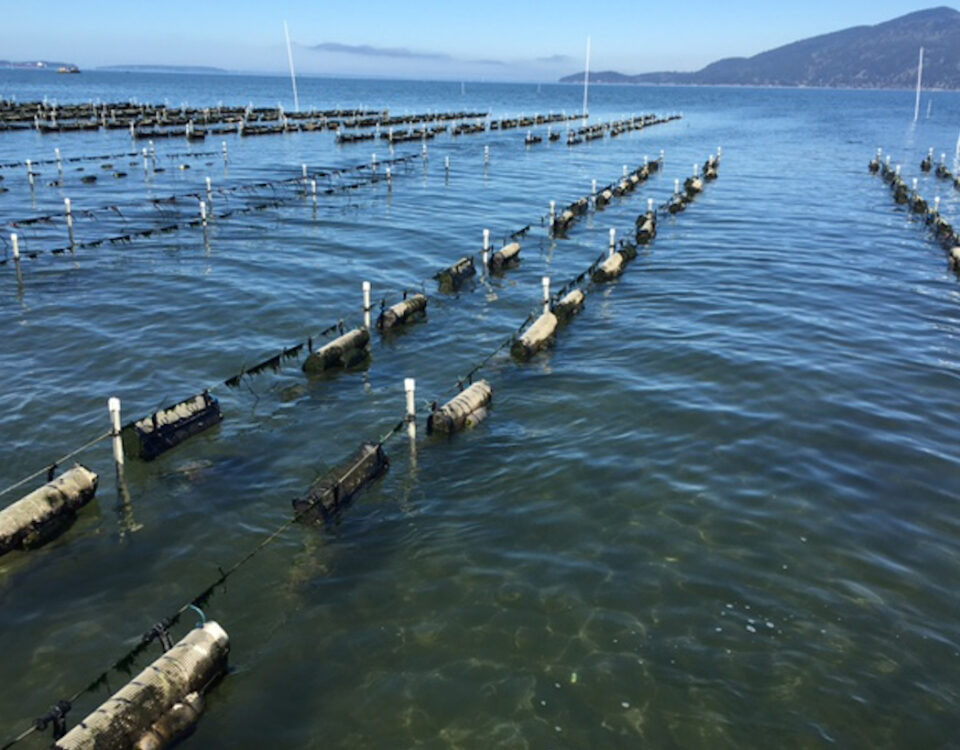 Looking for our Japanese site?

Looking for our Korean site?